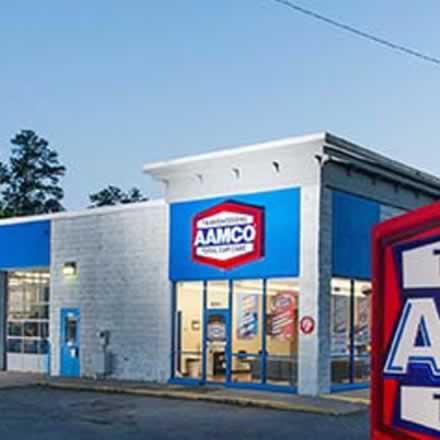 Here at AAMCO of Phoenix, AZ we stake our reputation on our award-winning customer service. As your local, independent AAMCO dealer, we want to make sure you're satisfied with the service you receive.

“I loved this place. I have only been to one other auto shop here in AZ and this place really impressed me. The owner Corey is extremely personable, knowledgeable, and went out of his way to help me out with my car this morning. I scheduled a maintenance oil change this morning but also mentioned to him that I'd been having some problems with my brakes. I told him depending on the price I wasn't sure what I would be able to pay for today. He assured me he could help me out in any way possible even if financing was involved. Not my favorite thing to do BUT I know I needed at least one new set of brakes, brake pads, and a rotor for the front passenger side of my car. He gave me a great deal. With my oil change and brake/brake pad and rotor change it was $231 after tax. That is the cheapest quote I've received from anywhere else so I gladly paid it in full. I don't plan on keeping my current car too much longer and I also plan on trading it in. He told me when I plan on trading it in to bring it into him and he can help me come up with a budget to fix it up first. I dropped my car off at 8:30 am and it was done a little before 10:30 am. Not too shabby! I'll defintely be going back there.”

“Always friendly. And do the job right the first and every time.”

“Quick fast and quality work. Cory at the AAMCO on Van Buren & 4th Avenue is the place to go.”

“Cory took care of my car as if it were his own. Work like that is hard to find.”

“Thank you for the great and prompt service. We are enjoying the quality you have provided.”

“If you visit AAMCO at the Van Buren St. location, ask for Corey. Very knowledgeable and personable. If you have transmission problems this is the guy to go see!”

“Thank you for the great service, communication through the process and the ride home - it was all very much appreciated.”

“The service manager worked very hard to find an affordable solution to repairing my vehicle. He was willing to match any quote I received from another shop.”

“Your customer service and work are always terrific!”

“Aamco the best! Corey is the best.”

“I have brought my vehicle to this location for several, unrelated repairs over the past year. The manager and technicians are first rate and have always provided first-rate service and high quality work. Any issues or concerns I had were resolved to my satisfaction. I am happy to recommend this shop to others.”

“Great service every time I go there!”

“They did a great job on my vehicle and will be back for other maintenance on my car.”

“This is one of most upstanding places I' ve ever taken a car to. We aren't from Phoenix, but were in town to look at a car we wanted to purchase. We called AAMCO ahead of time to ask if we could pay to have a mechanic look over the potential purchase and make sure we weren't getting ripped off (I'm a computer guy, not a mechanic). When we were leaving the dealer's for a test drive, we called to let them know we were on the way. He said that they were super busy, but that they'd clear a space for us because he had promised to look at it. After looking over everything, he brought me out to the car to show me a few things that we should be aware of if we were going to purchase the car. He then brought us inside and noted everything he thought we might be able to use to talk the dealer down. He (the owner of AAMCO) had previously been in car sales and he gladly gave us hint after hint on how we might be able to save money during the negotiations. After he was satisfied that we were well-armed to return to the deler, he told us that there would be no charge for his services. I was there with my wife and two young kids, and he said that because we were a young family he wouldn't charge us for anything. WOW. Remember that he wasn't even trying to earn repeat business from us - he knew that we weren't from Phoenix, and that he'd likely never see us again. Seriously people - you can't go wrong doing business with these people. Good, honest, kind, and knowledgeable. Oh, by the way - we ended up saving over $1800 off of the dealer's asking price, largely as a result of the tips that this AAMCO owner supplied us with. If I could give him more than five stars on this rating, I would!”

“The service and professionalism i received was excellent, i have been back since and will continue if needed in the future.”

“Rob was great and made me feel good about doing business with you. Thanks so much”

“Completely happy with the service.”

“They where straight forward about what my van needed down and took care of me. Will return if services need to be done on my van.”

“Not one complaint. Excellent on every front! Thank you!”

“The Guys at this AAMCO shop did a fantastic job. I thought that I needed to have a Transmission overhaul but it turned out that I needed a transfer case motor. They also pointed out a leaking Water Pump and Transmission oil change. The work was completed on the day that was quoted and the $$ Cost remained as was quoted. In addition the AAMCO Manager at this Shop also found financing for me. No Interest for the first 90 days. I would definitely bring my vehicle(s) back to this shop for any other services that may be needed. Excellent job/very pleased with the outcome. Thanks again AAMCO.”

“I'm so glad to be driving my vehicle again! Great work!”

“Always the best costumer service! Quick but thorough at clean”

“always a great job. my car people for life ”

“Appreciated the time spent going over all that needed to be done and the costs. Great service.”

“Mike and the guys did a excellent job! will be back for all my car needs. thanks guys”

“Scott & Mike, I brought in a difficult fix on my 88 Jeep Wrangler and you and you staff did everything possible to get it fixed including providing a rental after it was taking more time to complete than was expected. I will highly recommend you business to others.”

“My car has never run better! Mike Ditella kept me abreast on and explained everything in step-by-step detail. I appreciate Mike's forthrightness! Everyone was polite and very professional! A very honest and competent staff that left me feeling reassured that the transmission on my car was repaired correctly and that I will have another 130K miles of worry free driving! Thank you everyone!”

“The staff went above and beyond. I felt that they were honest and had my best interest at heart. They are my new mechanics. Thank you”

“My car is the highest priority and I've always been treated with professionalism and respect. I recommend this shop to my friends which is the best kind of referral. Thank you.”

“awesome place, awesome, honest, and caring is the staff, wished i could have found you sooner, we are together for the life of the VW BUG. thank you ps see you soon”

“This AAMCO and cory especially is fantastic!!”

“Your customer service and work are always terrific!”

“quick fast and quality work. cory at the AAMCO on Van Buren & 4th ave is the place to go.”

“great service every time i go there”

“They did a great job on my vehicle and will be back for other maintenance on my car.”

“Thank you for the great and prompt service. We are enjoying the quality you have provided.”

“AAMCO the best corey the best”

“Always friendly. And do the job right the first and every time. ”

“Cory took care of my care as if it were his own. Work like that is hard to find.”

“The service was great and everyone is nice and honest.”

“He was very good in customer service... I will always to come to AAMCO as soon as i get more money to fix my truck up more...”

“Thank you for the great service, communication through the process and the ride home - it was all very much appreciated.”

“diagnosed the problem correctly and completed the work in the time line required.”

“I absolutely love the staff and work at this location. Always friendly, on time and dependable work. Love them!”

“You have to trust your mechanic and the staff at AAMCO of Phoenix Central have earned mine. They're fair, knowledgeable, and very easy to work with. I have recommended this business to friends of mine and believe they're very satisfied as well.”

“I thought they did a great job. I haven't had a single problem since. Their diagnostic work was spot on. I will definitely come back for any major work. The turn around time on my repair was the most surprising thing. Great job.”